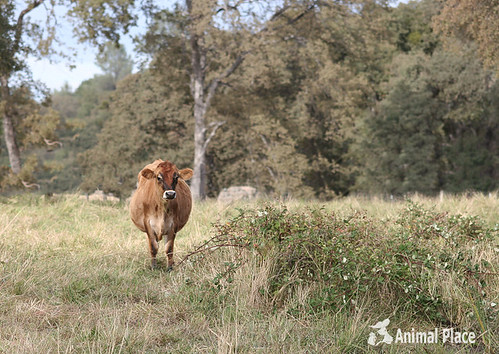 This calf has his "serious biznass" look on his face. His name is Douglas. He is a year old and in cow-world that is still babyhood. He knows his name, which impresses visitors. I call to him, and he comes running, legs akimbo, head bobbing, smile on his face. He is adorable until he tries to mount you, then less so.

He is from the dairy industry, a discarded male calf. Of the five calves rescued, we picked two to come to Animal Place. The rest went to another sanctuary. Douglas won me over when, despite his trauma and fear, he came up and sucked on my hair. Win. He is a troublemaker and you can blame me for that.
Collapse