Vacaville and the tea party - but WHERE'S THE TEA???

Vacaville is having a anti-tax tea party across the street from me. Tragically, there is no actual tea. I would have attended and cheered rambunctiously had they had tea. Because I am all about the tea, for real.

ETA: Oh yes, they are doing the event in a public park funded by something called taxpayers dollars. And they are having a Fairfield councilwoman speak who's paycheck is paid for by, you know, taxpayers. Ha. WIN! 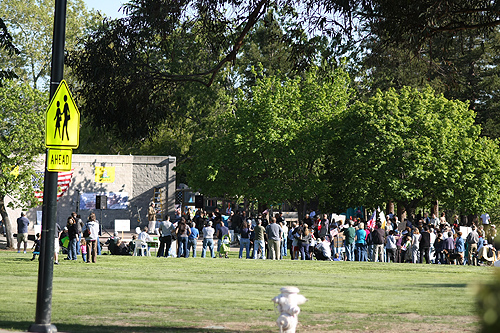 Vacavillians get down for the anti-tea tax party...or, anti party tax! Something like that. 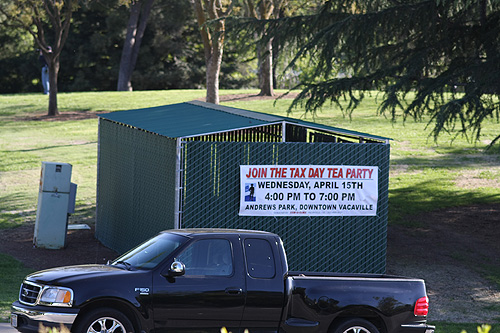 Every time I read this sign, I keep mis-reading it as "Join the tax death tea party" which I like a lot better than the tax day tea party.

For a few reasons on why I think this whole tax tea part shit is silly, behold:

Tax Day is becoming a day of national protest for groups of angry Americans who are against vague things like "taxes," "big government," and "huge spending." Dubbed "tea parties" by the loose confederation of irate citizens against the previously mentioned acts, these events are planned to take place today in all 50 states in at least 300 locations. While clearly a right-wing phenomenon, many people see these grass roots gatherings as simply the mass outcry of racist, uninformed voters who just don't like Obama. They are ironically protesting the tax hikes that Republican President Bush levied on the middle class while he was in office, while at the same refusing to give the current president's new policies a chance to work.

Before a crowd that organizers claimed was 15,000 to 20,000, but these experienced ex-advance man's eyes saw as about 3,000, a parade of right-wing personalities used tax day to decry taxation, government, Governor Arnold Schwarzenegger, and President Barack Obama with a rally outside California's state Capitol in Sacramento.

The event, like other so-called tea parties around the country, was heavily promoted by the Fox News channel, right-wing talk radio hosts, and the right-wing blogosphere.

America is going socialist and surrenderist. Obama is a Manchurian candidate. Schwarzenegger is a closet socialist. The federal government is both totalitarian and weak - a tough combination to pull off - and the end is nigh.

Huffington Post has lots of stuff on it. So does Fox, but I will not link to them thank you.