Yesterday, I helped out with a vegan bake sale benefiting the victims of Haiti's earthquake. We raised $1,600 - people enjoyed donated baked goods and made a positive difference for the people in Haiti. It was a win-win. All proceeds benefited Food for Life Global, an international organization that donates vegetarian and vegan meals to impoverished people.

On my way home, I was passing over the Yolo Causeway and noticed the beautiful sky, crisp and light and full of fluffy clouds after a recent storm. When I was at UC Davis, I loved visiting the Vic Fazio Wildlife Area, which is part of the Yolo Basin. In the winter and early spring, the entire park floods, and you can only really enjoy it from a distance. In the late spring, summer and fall, when the flooding recedes, you're left with gorgeous wetlands and a bird-watcher's paradise. I'm not a bird watcher, but I did love sneaking Mina into the park and exploring. I never let her off-leash, although I was very tempted. Technically, dogs aren't allowed out of the car to protect the wetlands and habitat of the birds. The park has a lovely driving tour, which always struck me as both fascinating and off-putting. I mean, how can you really enjoy the rustling reeds or the honking geese while safely ensconced in your vehicle?

Back to yesterday. I took the appropriate exit and parked as close as I could to the flood-plains. I really wish cameras could translate what your eyes see, but they just aren't that talented. The clouds were even more brilliantly beautiful than what my cameras captured.

The only downside - for me - is that the park is also open to hunters. It's sort of a catch-22. I can enjoy the park for free because hunters purchase hunting stamps to fund the preservation of the park. I'd be happy to pay, though, and enjoy the park sans guns going off and birds falling to the earth. (I realize not all of you agree with this sentiment - the hunters I've met have been nice, caring people so this isn't a misdirected hatred for hunters. But I'm vegan. So that is that). There were some hunters out in the marshes - there are a few more days of geese hunting, so I assume they were taking advantage of that. No gunshots, thankfully. There were also people hiking out with their dogs off leash, which just seemed like a bad combo. 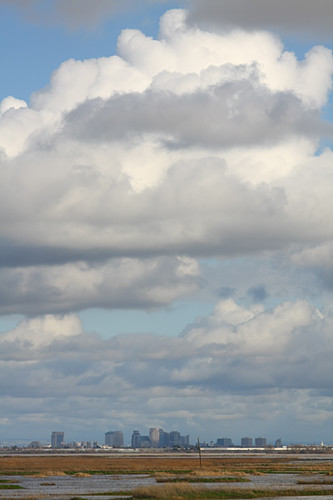 In the distance is the city of Sacramento. It's dwarfed by those clouds. 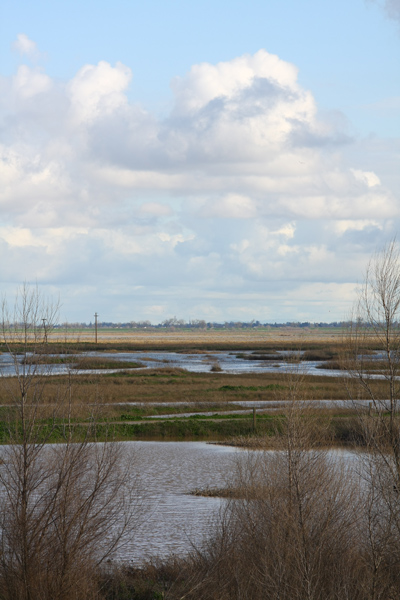 By summer, all of the water you see will be gone and underneath it will be a parking lot and driving paths. 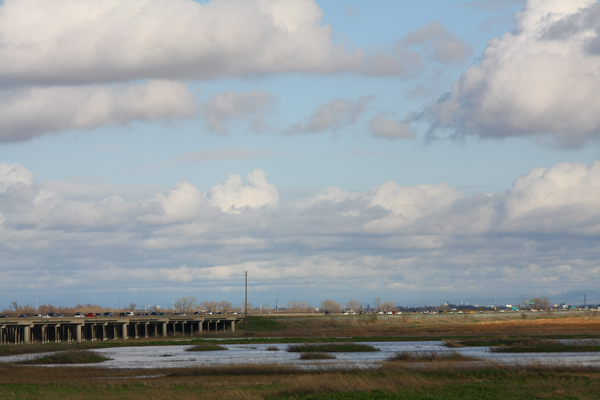 That's Highway 80, and you can see the causeway on your left. The water you see is obscuring the parking lot and paths of the park. However, it isn't at its peak flooding capacity. Some years, the water reaches near the top of the causeway, truly transforming the landscape. The causeway really is a neat concept. Bypasses and weirs (small dams) funnel flood waters into semi-natural flood-plains, mimicking natural flood events. If you care to learn more about the Yolo Bypass, this is a good article.

There are a few more photos:

Amtrak uses railroad tracks adjacent to the highway. I used to love taking the train home when I was at college and w/o vehicular transport. Another photo but taken with a different camera.