No canines or pumpkins were harmed in the making of this photographic spoof montage. A cantaloupe and unripened watermelon did get stepped on, but they are not gourds so it is okay.

Forget cockapoopoos or doodledogs, the world really wants to know all about punkadogs, or punkin x dog crosses. Well, thankfully, I happen to have a punkabulldog available for us to learn about. Behold Minagourdkin from the super cool cross of Esquiresquashhead x Spaghettibrainsjack. The female is topped variety is on the left, and I breaded (heh) her to the topless male on the right. 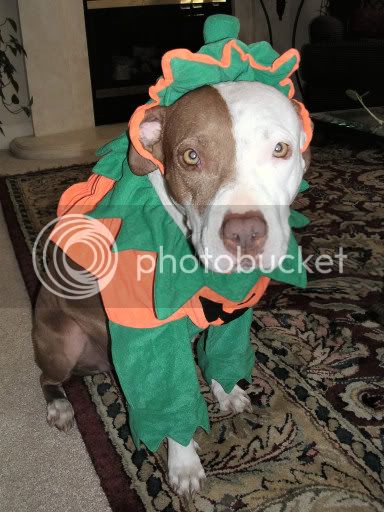 1) They are adorable and hard to resist. But do not be fooled, though they often have short hair, it is only hypoallergenic on days that start with M between the hours of 4:00 - 6:00 pm, and only if they are completely shaved.

2) They are sometimes bred incorrectly and their tops end up crooked. BUT, these ones are super-rare, and go for $3486789.65. All major credit cards accepted.

3) Because punkabulldogs are bred to be useful, cool, super-rare, "everyone has gotta have one" dogs, they come with handy-dandy coat-hanger ears. Coat hanger ears are useful, definitely cool, pretty rare, and most people have coats. 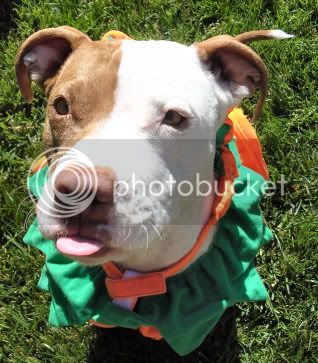 4) They are very treat motivated. Sometimes they will just stare at anything that resembles their treat bag.

5) They are great at useless tricks, like shaking your hand. Be warned, punkadogs are also notorious for other useless behaviors, like attracting a lot of fruit flies. That's no fun.

6) Sometimes they close their eyes and just hold their nose in the air. Some stoopid geneticist claimed it was b/c of the inappropriate pairing of a vegetable and a canine, but we know better. Or we think we do. Regardless, it makes for a good photograph.

7) They are super-smart. Which this picture may or may not prove. I'm not sure. I am sure she is probably smarter than a hot pumpkin pie. Not too sure about a cold one.

8) Punkadogs really don't care for their picture being taken. They think it will steal their seeds or something.

Well, now that you know a little more about this rare new mixed breed Breed, I have several puppies available who may or may not look anything like these dogs. I am accepting a downpayment of $50 million dollars and one gourd of your choosing (no moldy ones, please). Puppies come with a cute picture, a list of "Likes v Dislikes", a certificate of health from the gardener down the block, and a vaccination of something. Give the gift of gourd - buy a punkabulldog today!